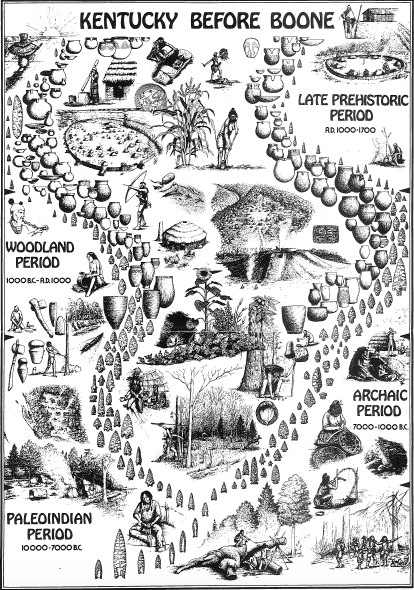 We know that people we call Indians or Native Americans lived in central Kentucky for thousands of years.  We know about them because we have found the things they left behind.  The men and women described in this story were part of a group we now call the Fort Ancient People.  Their way of life lasted for over 700 years.  This story takes place about 150 years before Daniel Boone was born.

Now picture the past.  Imagine looking across central Kentucky from a high place.  It’s a bright, cloudless day in late summer.  The view is very clear.  You can see for miles and miles in every direction.  The year is 1585 . . .

Most of central Kentucky is covered in forest.  Some of the oldest trees are so big that three people can’t touch fingertips if they put their arms around a tree’s trunk.  Many kinds of trees grow in these forests.  They are oak, chestnut, beech, black walnut, maple, yellow poplar, ash, sycamore, hickory, elm, hemlock, and pine.

Colorful flowers and many types of mushrooms grow in the forests and along the forest edge.  Fruits and berries grow on thick vines, low bushes, and smaller trees.  Nuts of all sorts also grow on trees.

Fires set by the Indians or by lightening have created grasslands in some spots.  Early settlers called them “natural meadows,” “barrens,” or “glades.”  Only a few trees grow in these grasslands.  They are oak, honey, locust, hackberry, cherry, walnut, blue ash, pawpaw, and buckeye.  Native grasses and clovers, however, grow thickly in the grasslands. There is blue stem, wild rye, and running buffalo clover.

In other places, native cane, a woody-stemmed grass like bamboo, grows 10 to 12 feet tall.  Early settlers called these places “canebrakes.”  No trees grow here, only thick stands of native cane.  These canebrakes stretch for miles and miles across the rolling hills.

Hundreds of freshwater and saltwater springs flow in central Kentucky.  Animals are attracted to these salt springs or “licks.”  They like to drink the salty water or lick the salt on the ground.  The animals also eat the grass and clover nearby.  Large areas of land around the largest licks, sometimes as much as 80 acres, are treeless.  This is because herds of animals graze and trample the ground.

The rivers and streams flow freely. In the spring and after a big rain, they rise up over their banks, flooding the lands nearby.  During dry times, even the Ohio River can be waded across. The water is so clear the Indians can see the rocks and shells on the bottom.  Everywhere the water is good to drink.

The rich forests, grasslands, canebrakes, and waterways of central Kentucky provide food for the Indians and for many kinds of animals.  The largest land animals are white-tailed deer, elk, bear, and mountain lion. Smaller animals also live in this region.  They are opossum raccoon, wolf, bobcat, dog, fox, beaver, skunk, mink, squirrel, mouse, groundhog, and rabbit.